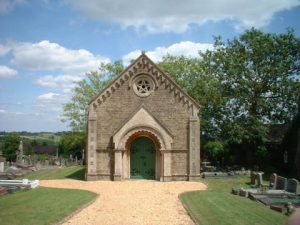 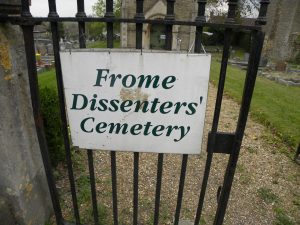 FROME DISSENTERS CEMETERY– is located in Vallis Road near the new pedestrian crossing and opposite the premises formerly the WHITE SWAN public house.

Constructed in 1851 on land purchased for the purpose from the Marquess of Cork and Orrery, over 6200 burials and interments have taken place at the Cemetery.

Originally built for the Non-Conformist or Dissenting Churches it can be seen from the Registers that members of every Church in Frome have been buried here.

Following a meeting in April 2002 called by the Trustees over a lack of funds and support for continued maintenance, a transcription of the Registers was undertaken and copies of the transcripts in a variety of formats, plus photographs, is now available on CD.

This action has raised awareness of the Cemetery, contributed funds and encouraged some people to assist with the maintenance, but more of both funds and people are still required.

In 2013/2014 the Superintendent’s Cottage was converted ton two flats, having been leased to Somerset Care & Repair for 15 years.  Tenants moved in in March 2014 and the Trustees have received an income since that date.  Then Income has enabled the Trustees to carry out repairs and maintenance to the Chapel, and with the invaluable assistance of Andy Smart to  carry out repairs to and restore fallen headstones.

The right of way giving access to the bottom gate is in the process of being cleared of extraneous vegetation and litter in order to make a pleasant nature trail.